The British Forces Foundation boosts the morale of servicemen and women on the frontline and in operational theatres all over the world, primarily through high quality entertainment with big name stars.

The Charity is also lateral and contemporary in its numerous other award-winning projects designed to bring the public and their Armed Forces closer together. Our shows, and the The British Forces Foundation's other projects, convey the gratitude of the British public for the work of the Armed Forces and the sacrifices they make. Support our men and women on the frontline. 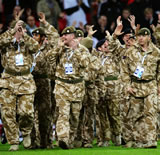